One of the things that makes Linux unique is the variety of choices in distribution various groups offered. I had been running various distributions in virtual machines for some time, so I wasn’t totally unfamiliar.

Currently I’m working with Xubuntu, a variant of Ubuntu that uses XFCE as the primary desktop environment. Ubuntu has most of the software packages I want in reasonably current versions, has a large number of people banging on it, and is officially supported by Steam. XFCE is a nice, simple, and clean user interface. I have the hardware to run practically any desktop environment but have a fair bit of experience with XFCE under VirtualBox. 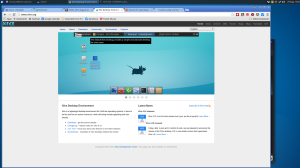 I used a live DVD to test out Netflix before committing to an install.

Installation was very easy. I resized my NTFS partition, then rebooted into Windows 7 a couple of times to run disk checks.

The only real problem I’ve had is that my USB WiFi adapter has been starting to glitch. I’m almost positive this is a hardware fault because it glitches under Windows 7 as well. I’ll get three or four hours of service, then it starts throwing errors. Unplugging and reconnecting the device usually works. A replacement is on order.

Installation was actually easier than setting up the same hardware on Windows 7, where both video and WiFi adapter demanded searching for updated drivers. This included the chicken/egg problem that you need the drivers to have an operating system to search for the drivers. With the exception of the glitchy network adapter, everything has just worked so far.

She’ll be coming ’round the mountain when she comes

I seem to be coming back around to linux again, and feel like putting down some of my own thoughts about the decision. While the “year of desktop linux” has been a running joke for the last two decades, I think we’re now getting to the point where the decision is less of an issue.

I should probably clarify that my home computer is a home-built Frankenstein built on an installment plan: I buy an upgrade, and I install it.

The Politics: Why not Windows 10?

Privacy. It seems that with Windows 10 that Microsoft has gone opt-out rather than opt-in on certain forms of data reporting. While it looks like a lot of this can be turned off, the recent finding that parental modification was turned on by the upgrade disturbs me. Of course, I’m 44, own my computer, and am not accountable to my parents. But it opens the question about what other kinds of reporting might be turned on as a useful feature by a future update.

Why Linux? The Hobbies

At the moment, two of my hobbies involve writing and programming. In both cases the workflow I prefer to use is slightly better supported on Linux.

Currently my preferred workflow includes markdown or emacs org-mode and pandoc. Both emacs and pandoc have been ported to Windows but linux remains the primary platform of support. Windows introduces some annoyances to the process.

My programming hobby involves solving simple puzzles in multiple programming languages. Most of the programming languages I work in have Linux as a primary platform and Windows as a secondary platform. In Common Lisp for example, SBCL offers a bit better features and performance compared to any of the open-source lisps for Microsoft Windows. Working through cygwin for gcc and clang is something I find to be a bit awkward.

There are exceptions. Racket has always impressed me on any operating system. Microsoft has F and C#, but I don’t have an investment in learning them.

One of the reasons I went to Windows 7 in building my Frankenstein was access to AAA MMORPG and RPG games. I think that’s less compelling to me now than it was previously for a couple of reasons.

The first is that I’ve had a loss of faith in game design lately. Dragon Age 2 and Mass Effect 3 were huge disappointments. Generally speaking, take away the cinematic cut-scenes and the primary game mechanic involves cutting your way through dozens of dehumanized mobs to get from spawn point to goal. Even Bethesda’s Fallout and Elder Scrolls series hinges on boss fights and ambushes to move the story forward. So I’m no longer as interested in playing those games as I’ve been in the past.

And on the other side, Valve and GOG.com have made great strides in bringing new games and back-catalog releases to OS X and Linux. 20 out of 54 of my Steam games have Linux ports, along with about half of my GOG.com titles (including three of the games I’ve been playing the most this year.) Playonlinux has moved WINE gaming forward a fair bit. It’s an area where the last few years have seen a lot of progress.

Late last year, Netflix got support via Google Chrome, so that’s taken care of. Still, a big test before install involved watching videos through a liveCD.

And if all else fails, I’m not burning any bridges by dual-booting.

END_OF_DOCUMENT_TOKEN_TO_BE_REPLACED

This bubble of ignorance that conservatives live in when they treat LGBT stories as “other” isn’t just bad for academics, however—it’s also dangerous to our country’s ongoing struggle for equality. Excluding LGBT people from one’s worldview means it’s easier to see them as less than deserving of empathy—or less than human.

One military training instructor who worked for me and counseled young airmen told them: “Homosexuals were the downfall of Rome, and now they’ll be the downfall of the military, and the military will fall because of their lust and greed.” About 13 trainees filed a complaint against him. Those complaints went straight to my boss, who told me we had to do something about it.

I went to legal, and legal said, “You have to do something about this.” We had a zero tolerance policy on discrimination. I went back to my staff and told them. Monk said, “He’s got freedom of speech!” But we had to discipline the instructor. It wasn’t even a huge punishment. It was a warning.

Monk was up in arms. He came to me and said, “You know, ma’am, I can tell we’re not gonna agree on this. My replacement is already coming in. Do you mind if I take leave while this happens?” I said, “Sure, it’s your prerogative.” He walked out of my office, filled out the paperwork, gave it to me, and I approved.

George R. R. Martin tells his side of the Hugo Losers Party:

“This weekend we upgraded my 14-year-old son’s laptop from Windows 8 to Windows 10. Today I got a creepy-ass email from Microsoft titled ‘Weekly activity report for [my kid]’, including which websites he’s visited, how many hours per day he’s used it, and how many minutes he used each of his favorite apps.”

Useful feature for parents, boo for making it a default settings change.